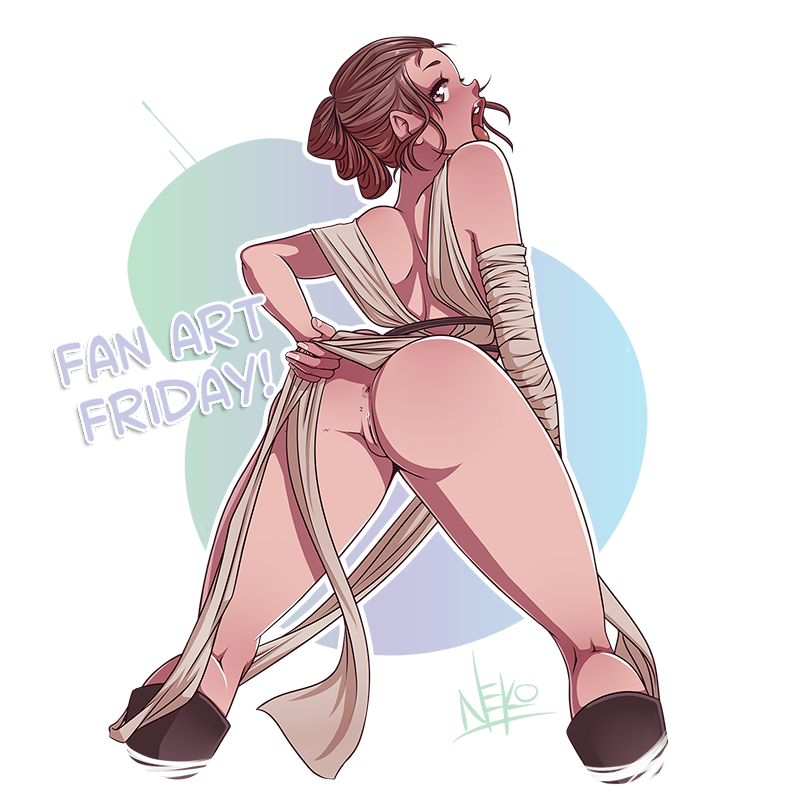 Padme looks the finest in the mornings! 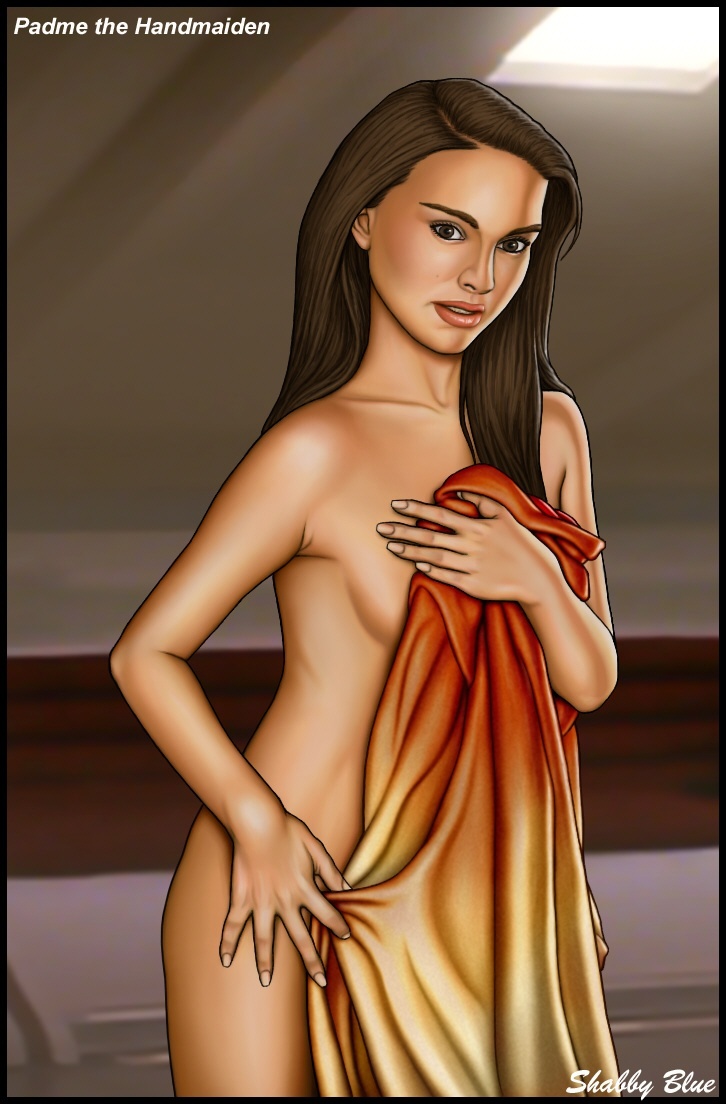 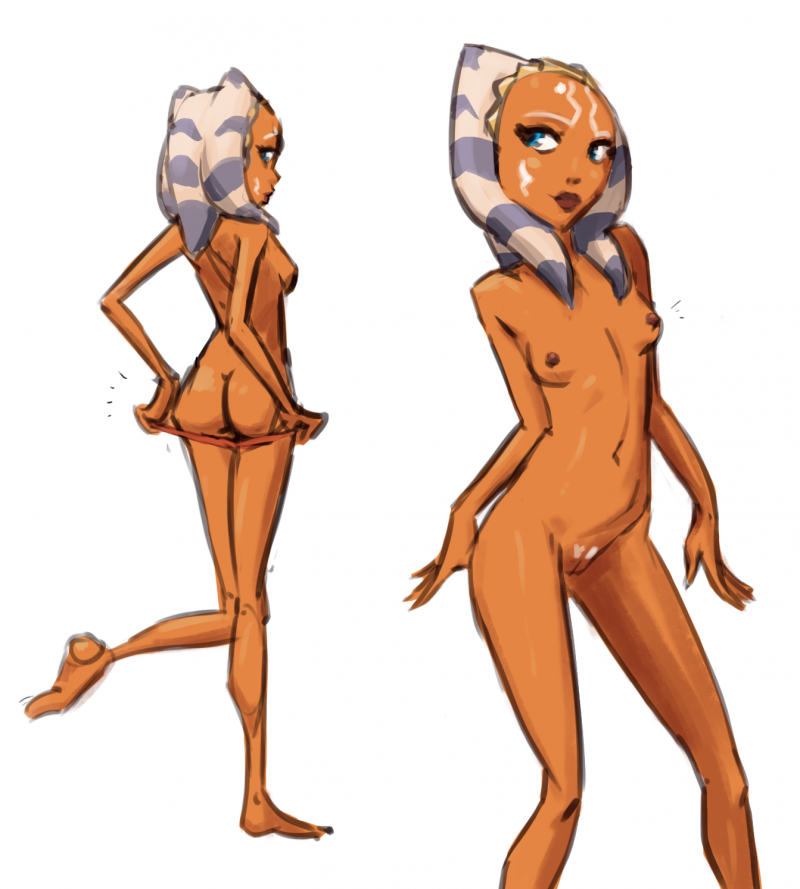 This jedi has found a chick to drill even on abandoned Tatooine! 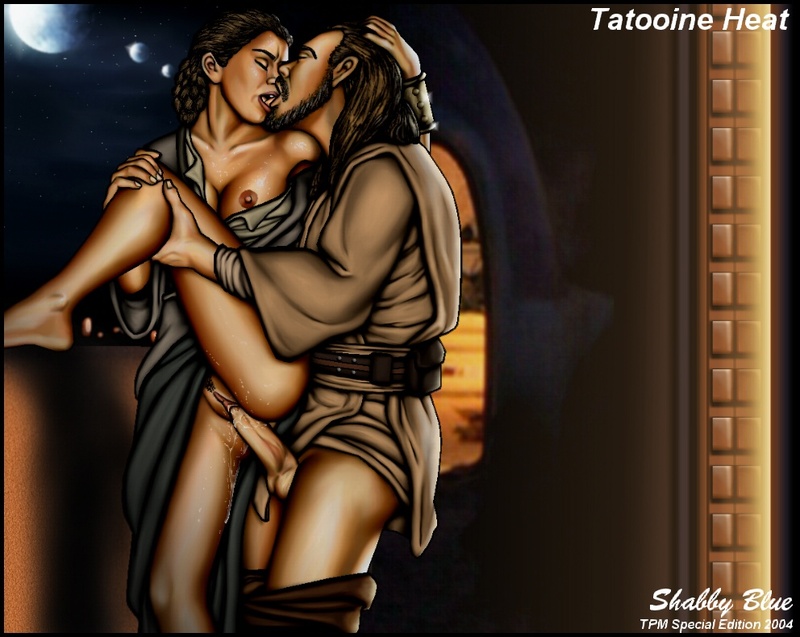 Throne room of Naboo, Queen Amidala is sitting
resplendent in her complicated robes. As the camera runs
around her, we note (unless we are distracted by her
impressive hairdo) that she does not wear any panties. In
fact, her bottom is bare (though a flowing skirt of white
fabric hides her lower legs, so you have to buy the video
and watch it twice to see
it at this point).

One of Amidala’s handmaidens enters. She looks just like
Amidala and so might just be a poster child for the
‘Clone Gals’-Episode. She wears very thin, flimsy robes,
which do not hide her lusty body, but since she is just a
minor character, the camera does not dwell long on her
curves. Still, fan sites about her spring up all over the
net, who later start flame wars with ‘official’ Amidala
fan sites fighting over who is more beautiful and has
cooler action figures. After all, George Fucas’
‘Handmaiden Padme The Other One’-figure even has a nice
plastic collar making her look really submissive and
handmaidenish when she wears it.

END_OF_DOCUMENT_TOKEN_TO_BE_REPLACED

Marsis woke up, Bariss still laying in his cot with him.  He wondered where ahsoka was, he knew she would have wanted to get in on the action…  Suddenly his door opened and Ahsoka walked in.  She looked at Marsis.  He softened cock was hanging loosely over the bed.  Her mouth hung open as she stared in amazement at his large member.  Well this looks really bad doesn’t it?  He asked her.  No, she replied it looks fun.  Bariss was awake by this time, she was obviously startled at ahsoka’s presence.  Ahsoka, Closed and locked the door behind her.  She removed her small skirt and tattered shirt.  Bariss looked at her in shock wondering what Ahsoka was doing.  Ahsoka’s perky tit’s and nicely shaped body turned Marsis on, by this time he was sure Ahsoka had noticed his slowly rising cock.  She walked over to him, and bent down in front of him.  She prodded his dick with her finger.  Mmmmmm.  She said before she even inserted it into her mouth.  She pulled his now erect member down to her mouth and slowly inserted it into her mouth.  She slowly ran her tongue up and down his long shaft.  He grabbed her head and pushed in to his crotch.  Bariss slowly climbed onto the ground and shoved her mouth into ahsoka’s pussy.  Ahsoka’s moaned against Marsis’s dick.  He moaned himself.  Ahsoka moved to one side as Bariss came up and put Marsis’s balls in her mouth.  She moved them around in her warm mouth.  Between that and Ahsoka this felt amazing.  He had always dreamed of screwing two girls at one time.  He could feel the sensation he was about to come.  Ahsoka… he moaned. It’s coming.  She pulled his dick out of her mouth and began stroking it.  Fuck!  He screamed as several shots of come squirted out of his dick onto ahsoka’s face and into her mouth.  Ahsoka pulled him down onto the floor and threw him on his back.  She straddled him and slowly lowered herself onto his dick.  Bariss came forward to him and shoved her perfectly formed tits over his face.  As Ahsoka continued to fuck him Bariss continued to rub her titties in his face.  Bariss stopped as Marsis moved.  He pulled Ahsoka off his cock and laid her down on her back.  Bariss laid her head underneath of his groin as he laid down on his stomach to give Ahsoka oral.  Bariss began sucking on Marsis’s cock as he began to suck on Ahsoka’s pussy.  He ran his tongue in and out of her wet pussy.  He reached up and rubbed her clit.  She screamed aloud as he continued the two motions.  Bariss’s tongue was magic, it ran all around his cock, on the head and all… Ahsoka’s screaming got louder as Marsis continued to work his magic.  Give me your dick Marsis!  Ahsoka screamed.  Marsis pulled his dick from Bariss’s mouth and inserted it into ahsoka’s pussy.  He was standing on his knee’s, she was on her back.  She wrapped her legs around him as Bariss lowered herself down onto Ahsoka’s mouth allowing ahsoka to give her oral.  Marsis began thrusting.  Ahsoka screamed out from under Bariss’s pussy.      Bariss stood up and shoved Marsis down on her back, pulling his dick out of ahsoka.  Bariss lowered herself down onto Marsis’s mouth, while Ahsoka began sucking his dick once more.  He ran his tongue in and out of Bariss.  He reached up and rubbed her clit.  Oh fuck!  Bariss yelled out, that’s the spot… that’s the spot! It’s coming! He yelled to ahsoka.  Ahsoka kept fucking and he came in her mouth.  She swallowed.  He laid back as Bariss got off of him.  That…. was… great!  He said.